In the midst of the Tanzanian Maasai step, farmer Jaap defies water shortage, political difficulties and other unpredictabilities life in East Africa involves. He farms his 1000 hectares organically in an old fashioned way. 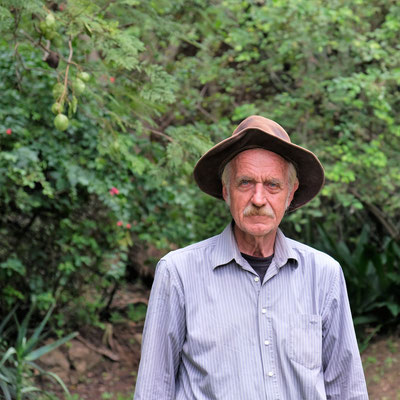 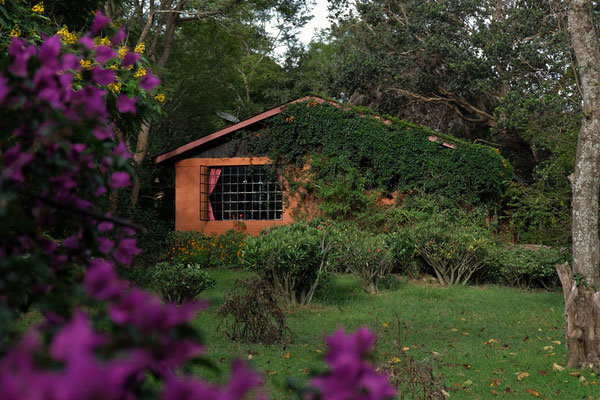 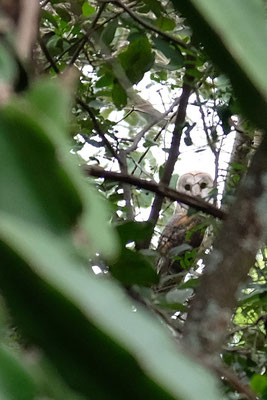 We are sitting silently at the farm's big window and look outside. Rain is sweeping from the sky, drumming on the roof above us, bashing the trees, flowers, plants, lawn and on all those many hectares of farmland around us. The air which, only seconds ago, had still been dusty and filled with the buzzing of insects, is being washed clean. The birds have fallen silent and are hiding in the trees. Only the owl dares a short flight through the passing shower, elegantly perches on a branch, shakes off the water and indifferently watches the approaching lightning. The evening smells of moist soil, wet grass and tangy cigar smoke.

I try to decipher Jaap's facial expression, but I cannot make sense of it. In this part of the world, people always talk about the rain. About the devastating consequences if the so-called “rainharvest” holds off. About the dry months June to March when not a single drop falls from the sky. Water is the limiting factor, that hampers the plants and Jaap's whole business concept from growing further. Shouldn't he be rejoicing, now that it's raining? “It is a balancing act. This rain drowns the caterpillars that were just getting comfy in the sorghum panicles. That's good because we do not spray to get rid of them. But for the young beans and peas, the rain is a bit too strong. It might damage them.” He looks up to the sky. “Enough now, come back in a few days!”

I am in the north of Tanzania, about a 1,5 hour's drive from the town Arusha. Jaap's farm is located in the middle of the Maasai step and comprises 1000 hectares. 70% of those are used for agriculture, the rest is wild bushland. In annual turns, beans, peas, and sorghem are grown here - without any use of fertilizers or sprays. In between, the fields lie idle for one to two years to give the soil some rest.

The farm buildings are located at the foot of an accumulation of “Kopjes”. These reddish granite rocks can be found all over Africa. From their top, the view on the surrounding landscape is breathtaking. In the Northwest, the Rift Valleg and the Serengeti Savannah extend for more than 6.000 km. In the South arises Mount Lokisale. And in the Northeast sits, enthroned, somehow pillowed in soft clouds, the 4.500 meter high Mount Meru. Sometimes I can see the snow-covered Kilimanjaro to his right. It is said that Queen Victoria gave the nearly 6.000 meter high Kilimanjaro as a present to her nephew Kaiser Wilhelm II when Tanzania was still a German colony. What a modest gift...

40 years ago, Jaap set up the fields in terrasses to avoid errosion. “When we started the lease negotiations with the government in 1987, everything was wild bushland. We first built some provisional farmhouses, took measures, made plans and then cleared the land field by field along the key lines.” Between the fields, earth walls that are covered with grass, bushwood and trees lead the precious rain water to the retention basins. If all goes well, the water may just be enough until next year. 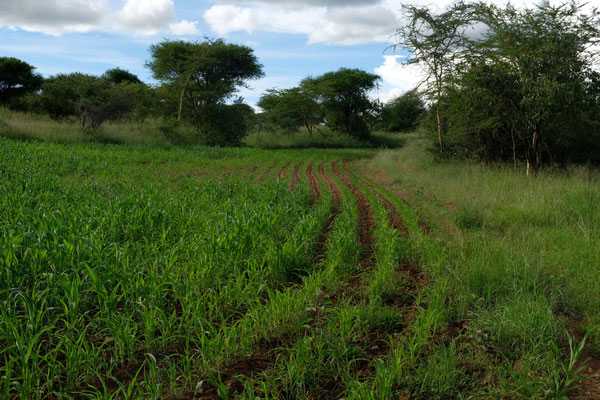 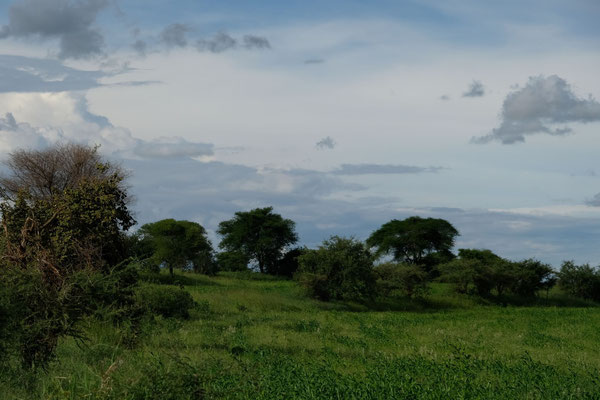 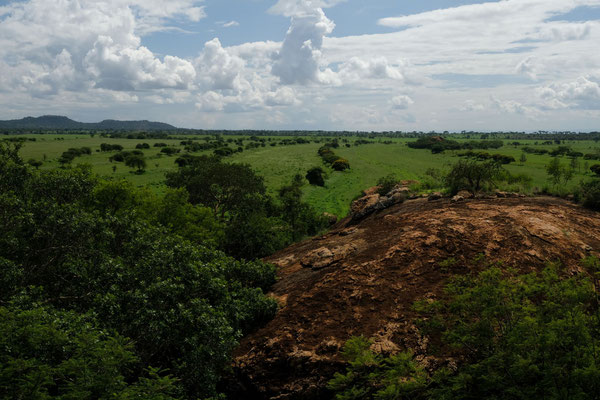 Never before have I seen that agriculture can make a landscape so much more beautiful than it would be without any human intervention. Curved stripes of bright green sorghum fields meet the still sparsely covered bean fields, interrupted by dams, idle lying fields, swaying grassland and wild bush. Although put in order by mankind, the wild, beautiful Tanzania shimmers through at every inch. I can sit on the Kopjes for hours and hours, letting my gaze wander over these stunning surroundings.

The farm as a habitat for insects and wildlife

On my long walks through the farm I am amazed by the habitat that these 1000 hectares provide to all kinds of animals. There is a constant chirping, fluttering, buzzing, humming, and scuttling all around me. Birds of all different colours find their nesting places in the bush or on the dams between the fields. Unfortunately, they seem to have established a quite effective warning system whenever I approach them - apparently, they do not appreciate the press.

Guinea fowls eating caterpillars run away hectically, shrieking agitatedly when the spot me. Colourful butterflies hover enticingly in front of me, luring me to follow them into the flowery grassland. Which can become rather dangerous, because even if I haven't seen any of the local ardwarks yet, they leave their traces everywhere. One day - much to the amusement of two Maasai boys have been watching me couriously for a while - I stumble straight into one of their well hidden holes. 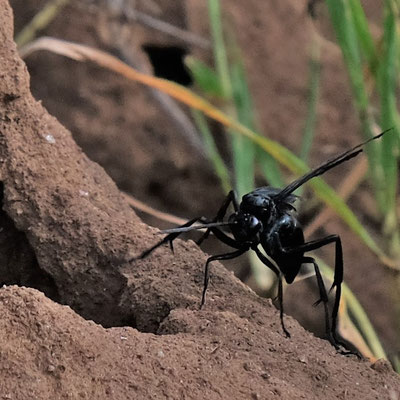 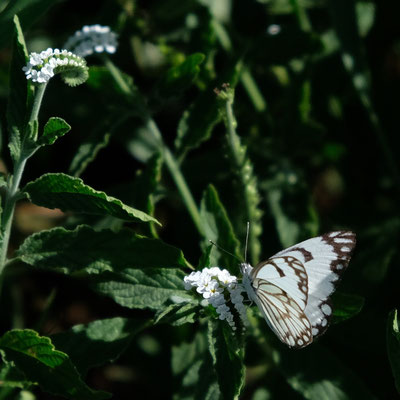 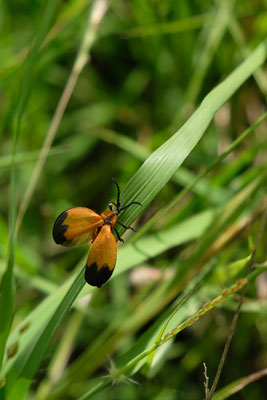 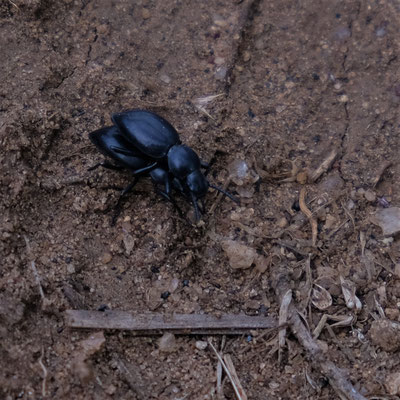 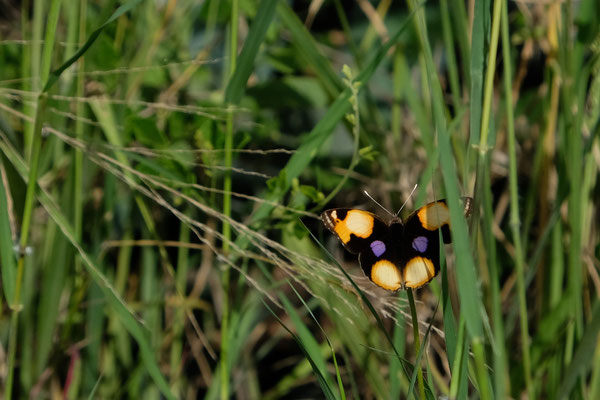 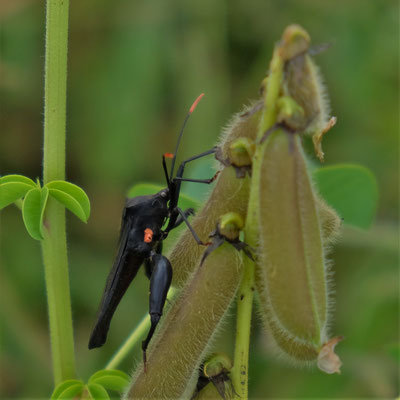 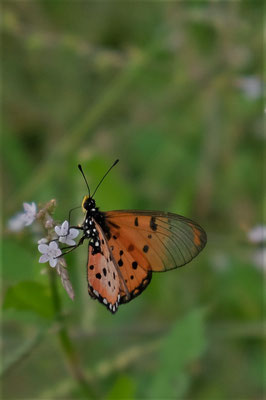 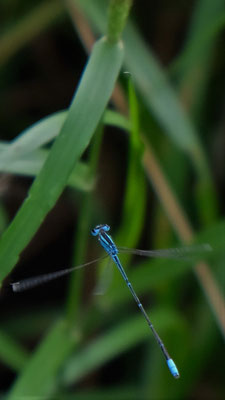 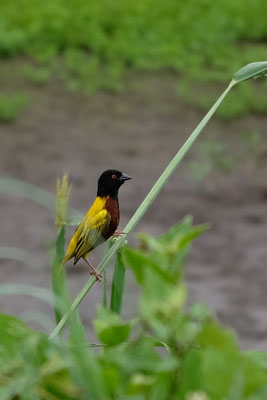 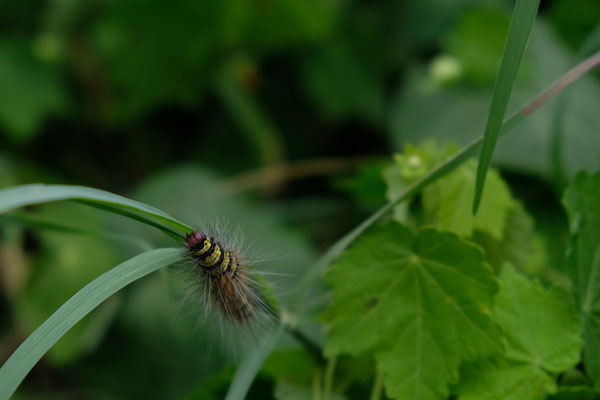 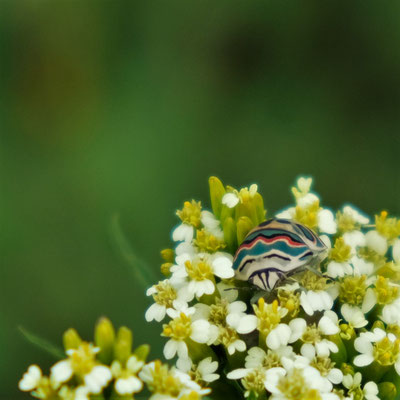 I see ostriche couples prancing proudly through the crops whilst a group of zebras wallows joyfully in the freshly plouged fields. Thompson's antilopes nibble at the seedlings and I am glad I am the only witness to see this seemingly peaceful scene. The wildlife here can be very destructive - but oh, it's beautiful! 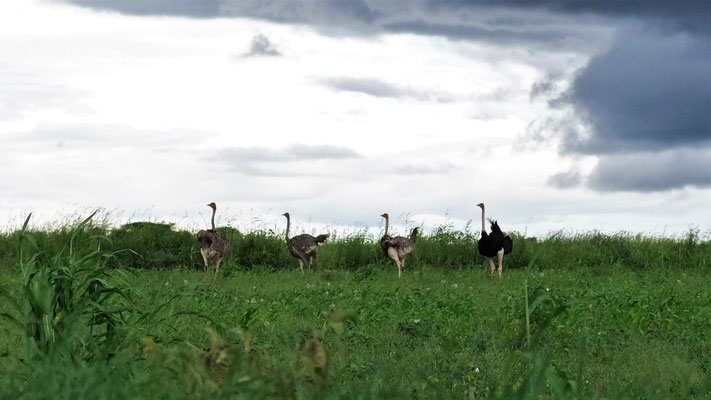 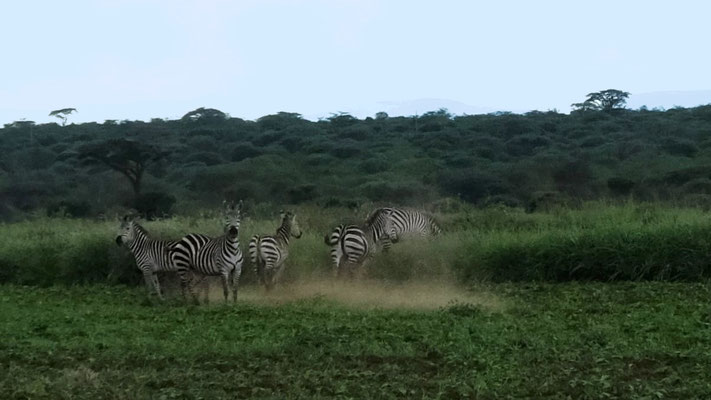 A glance at the neighborhood

"It's not just the game that causes problems. Dealing with our Maasai neighbours is at least as difficult. They often break through our fences with their herds, let their cattle graze on our land and drink from our water basins. This can cause huge damage! We tried to agree with them that they can use the water from the reservoirs for human consumption, but agreements with them are very... flexible. Meanwhile we have converted parts of our land into "buffer zones" for the Maasai, where they can let their kettle graze if, in return, they make sure that nobody else breaks in."

As Jaap told me in the beginning, it's all a question of balance.

At the end of March,  when the first rains fall, it is time to sow. Once that is done, everything else depends on the further amount of rain - no one here can afford artificial irrigation. The weeding is partly done with machinery, partly by hand, until the plants are big and strong enough to oppress the competing weeds. After the harvest in July, the short season is already over, during which not only 30 permanent, but also another 30 seasonal workers find work here. "Traditionally, the maasai used to live as normads, but more and more of them have given this lifestyle up and are now farming themselves. For us this means less workforce for labour intensive tasks such as weeding, which is why sometimes we loose entire fields to the weeds. Sorghem needs less caretaking because it grows fast and quickly trumps the weeds. Beans and peas, however, which do not grow high without support, are much more problematic. This year, we have tried for the first time to plant sorghem and peas together, so that the peas can climb up on the sorghem to escape the weeds." Jaap laughs. "But if the rain lets us down, all our nice plans are in vain." 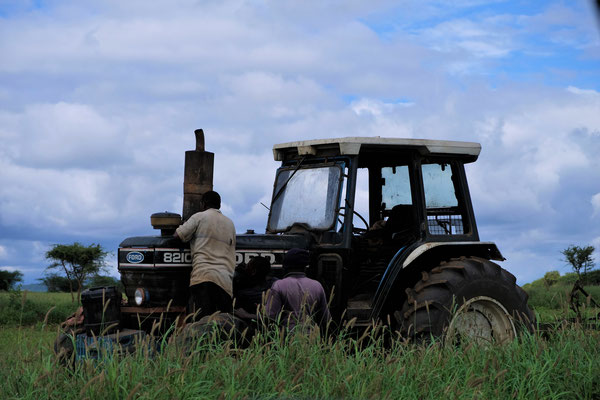 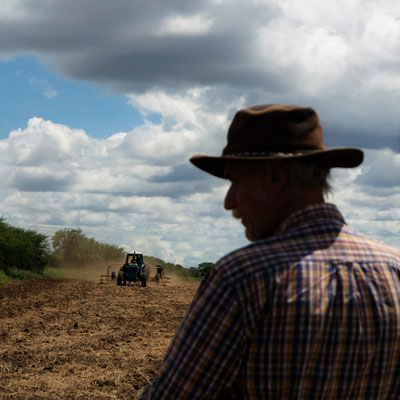 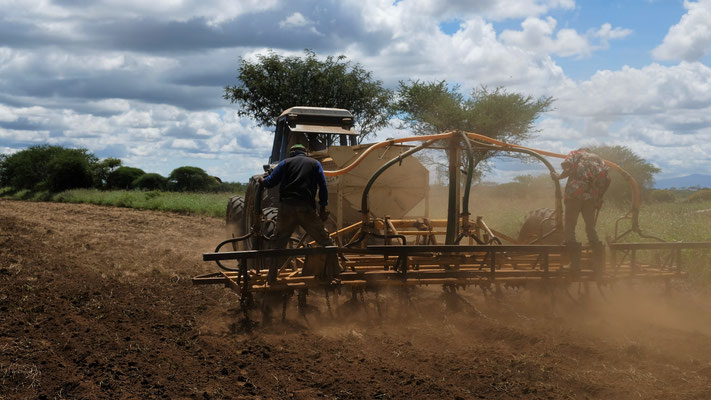 Lifestock as an additional source of income

"If my son Bram and I had not decided to farm livestock as well, the farm would not have survived. Extreme weather conditions and the constantly changing regulations for sales and exports of our produce are tough." Today,  Jaap has 100 cattle, 300 pigs and 1200 sheep, whose high quality meat and exclusive cold cuts create an all year additional income for the farm. The demand comes mainly from the local safari companies and from some private clients and by far exceeds what Bram and Jaap can supply. So why not grow further, I want to ask, but I bite my tongue. Once again, I forgot about the water problem...

Apart from seeds, hardly any external resources find their way into the farm cycle. The sheep and the cattle only eat grass and herbs that grow on the farmland, and  in return, they fertilize the soil. The pigs are fed with a mash based on the farms sorghem. Jaap also adds some of the local red soil to their food - it contains important mineral nutrients.

"We raise the pigs and sheep ourselves, because they grow quickly. But we buy the cattle from the maasai when they are around two years old, often in exchange for food. The maasai cattle is generally not very well nourished, because for them, quantity matters over quality, but they are quite resilient against diseases." 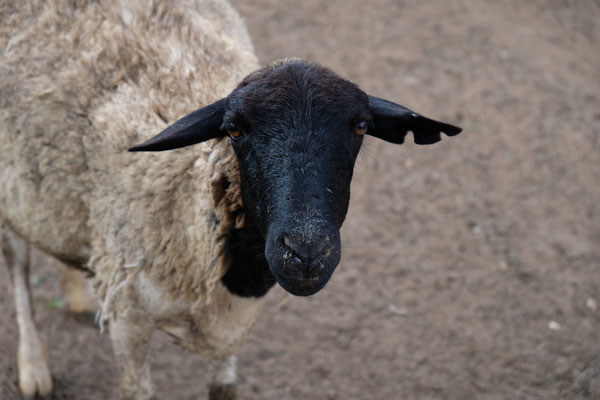 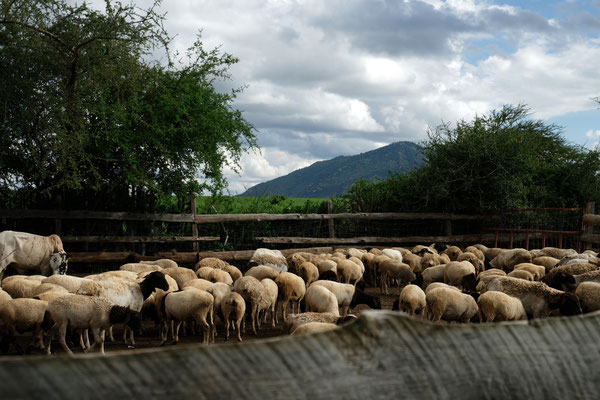 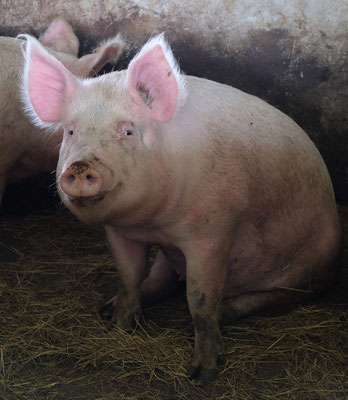 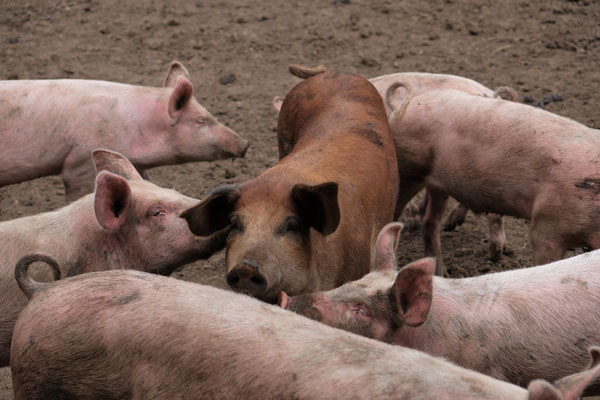 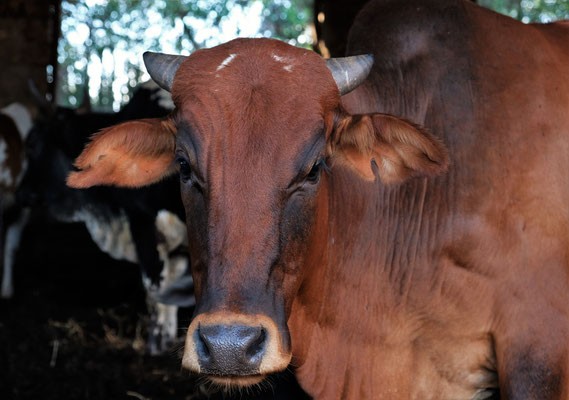 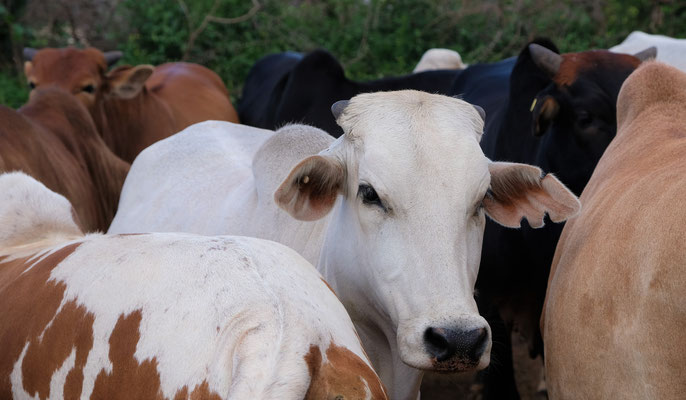 Sustainable without a label


I ask Jaap if the farm is certified organic. He laughs sceptically. "A few years ago we looked into this and even got in touch with a certification body. They explained that they would have to visit the farm on a regular basis - which I perfectly understand. In the small print, however, we discovered ridiculous requirements for star restaurants and luxury hotels. We live a simple life. We have electricity from 7 to 10 in the morning and from 6 to 9 in the evening. We shower with rain water heated by solar power and eat whatever the farm provides. Is this not exactly the way of life that Europeans call 'sustainable'? Soon enough I unterstood that the costs and efforts of a certification would be incommensurate to the plus I could earn. So we dropped the whole thing."

I'd love to issue him a personal certificate. Not only for his healthy soil, his unharmed crops and his happy animals, but for farming organic out of conviction, without a direct financial reward.

A balancing act between humans, animals and nature

Why did you decide to lease this land in the first place?, I want to know from him. "It was the biggest piece of land I could get in Tanzania", he replies, and I can see entrepreneurial spirit and courage in his eyes. It was never easy and it never will be. "Most big farmers have died or given up. We are the last big farm in the Maasai step that more or less pays for itself. The quarrels with the Maasai, the working morale and the crazy ideas the government comes up with on a regular basis as to how to make things more difficult for us are just as unpredictable as the weather. If you are looking for something simple, don't become a farmer - especially not in Africa." I ask him what would have to happen so that more people followed his example. After a long silence he answers: "Show it to the people". That's what I am planning to do.